I guess it’s fitting that my first ever post on this blog begins with what is arguably the biggest event in the UK poker calendar – EPT London. Especially as it’s thanks to my experiences there that I ended up deciding to launch – at last! – into the world of tweeting and blogging. Nothing like poker to encourage the most sensible course of action…

I was fortunate enough to receive accreditation and attend EPT to cover the event. It was my first ever major poker event and my chance to see close up some of the world’s greatest players. And seeing that the whole experience was a total assault on the senses – and suiting my completist’s love for classification – I thought that I would detail a few reminiscences accordingly.

So, poker players, here is my EPT version of the 5 poker senses….

It’s the first thing I noticed although couldn’t work out what it was exactly for a couple of days. And no, I don’t just mean the overwhelming smell of testosterone soaked adrenalin raised raw power infused sweat…and that was just coming from the massage ladies. No rather, it was a somewhat more delicate fragrance that hung in the air which my sensitive schnozz detected and then grew to love.

A sort of artificial yet fresh smell which seemed to come in waves. And then it hit me – it was the combination of new packs of cards and chips being broken open and riffled at each table. Surely for a player nothing but poker pheronomes?! Ok, a bit strange but hey, I’m one of those weirdos who spends a slightly too long amount of time sniffing new books so I guess no surprise there.

This obviously links to the previous sense and is something that everyone remarks upon on their first visit to any relatively large scale poker tournament. The sound of chips being riffled is instantly familar from TV but magnified to a louder yet strangely soothing level. And it might sound like a bizarre comparison – but then I do love a quirky tangent! – but it reminded me of accounts of visitors to medieval monasteries where the first sound they would hear as they walked through the cloisters was that of the monks murmuring and whispering in their cells as they read aloud the scriptures and prayers. Each individual susurration combining to create a chorus like that of birds in the forest. And when was the last time you heard poker players being compared to medieval monks eh?

But more than the obvious sound of the chips not to mention the packs of cards being ripped and riffled, there’s the hubbub that you can dive into whether walking around the tables or even better, standing at the bar – not surprisingly a spot where many delights awaited a poker soul. Sometimes I think top level professionals may forget how solitary a path the average poker player will often walk, especially if our experience is mostly online based. As with any relatively niche interest, it’s not always easy to find someone to discuss and consider together the vagaries of our game. So what a delight it is to be in a place of like-minded individuals and have people who get ‘it’ at every turn. And as happened one evening, eavesdrop on a very vociferous group discussion on the merits of ATo in EP. It didn’t quite get physical but my how it lifts my poker heart to see grown adults nearly come to blows over an offsuit hand…

Well, apart from the stunning sight of table after table filling up the grand ballrooms of the venue with 100s of poker players, there’s of course  that thrill of seeing one’s poker heroes strolling by, chewing on a burger, smoking a fag, snogging…oh wait, I’ll draw a discreet veil over that last one..

But this is probably a good time to make some confessions about a couple of poker faux pas that I managed to commit. Although I tend to be very good with faces, names often escape me. And there were a couple of times when a complete brain fuzz descended. So my apologies to Jamie Sykes to whom my initial greeting was, “Are you Norwegian?” which is not as strange as you would think considering the strong Norwegian takeover of the bar at that time.

But even more embarrassing than that was standing outside the venue with a couple of Kevin Killeen’s entourage and assuming that the very charming preppy looking young american who came up was probably just a visiting student at LSE or something equally academic. Rather than being Ike Haxton stepping down from Poker’s Mount Olympus.

No, I’m not returning to the snogging theme…I’ll wait for the late night version post watershed version of the blog for that. Rather, I”m thinking of touch in a much more general and I hasten to add, platonic way. The camaraderie, the conviviality, the mutual celebrations and commiserations. Connections were made and strengthened with people who perhaps had only been known online until that point. And new friendships were established.

I overheard over the week at least 5 conversations where mutual usernames were discussed and it was realised that these were players who had been encountered many times over the months and yet were – until now – just names in PokerTracker. Suddenly the word became flesh as it were and real living human beings were doing what we were always meant to do….snog

Actually no! Well, yes. But not just snog. Talk, interact, communicate. Be!!

I had a great conversation about this with Howard Swains of Pokerstars Blog fame. About how coming to EPT reminded me that the relationship between online and live forms of poker is much more fluid and less distinct than I had originally assumed. I am the classic recreational player that forms I guess the main bulk of your average Pokerstars customer base. By no means a professional but hopefully striving to improve my game. And online has given me the freedom and security to learn, explore and make a ton of mistakes without too much fear or embarrassment. Apart from a couple of trashtalkers in the chatbox but which unlike IRL,are easily deleted.

But EPT reminded me that poker is – as it always was since the dawn of its creation – a social game. Duh! Who knew? Talk about stating the bleeding obvious! But actually really easy to forget when sitting in the comfort of your room clicking away and seeing avatars instead of fellow human beings. So when I sat down at my first ever tournament last week, the sensation was that of utter bewilderment and at times sheer panic. Where’s my mouse?! Who are all these people sitting in my room? Where is my screen?! Why am I not in my underpants?…. Thankfully – for all concerned – I resisted the temptation to make myself suitably comfortable….

But even without playing a hand, just walking around and seeing the interaction of players and the palpable energy in the room showed how poker offers us all so much more than the virtual. Indeed, there is more truth in the old PS strapline than I ever imagined. Yes, we really are poker!

So my new poker resolution is to play a lot more live poker, to return to the traditional roots as it were. Yes, online is a wonderful means by which to improve one’s game and without it, there is no way as an absolute beginner I would have ever had the courage to walk into a venue. But there must come a point I believe in a poker player’s journey – whatever their skill or level – when they need to revisit the faith of our fathers as it were. I am sure that Bishop Brunson would approve 🙂

And with that, I finish on the taste of a nice snog…no, dammit! Enough of the snogging…well, it could be argued that I never get enough snogging but this is no place for my relationship woes…

Instead let’s finish back at the EPT bar where I spent many a happy hour over the course of the event. And not just drink! I will not forget the wonderful evening of drinks and canapes laid on by Alexandre Dreyfus and his splendid team at GPI talking about the sportification of poker. There are many exciting developments ahead for poker which no doubt will be of great interest to players of all levels.

But in the meantime I will leave with you a memorable image from the tourney that the attendants at the GPI seminar played and yours truly demonstrating that even in the midst of battle, it takes nothing more than a glass of champagne and a tray of canapes to distract even the most concentrated of players… 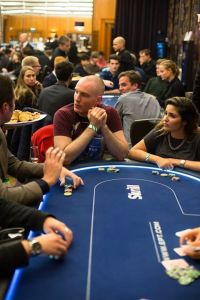